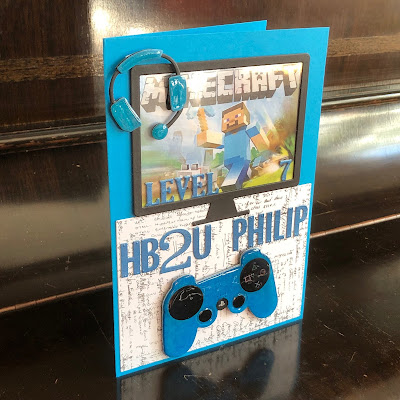 I finally got a card done for  {Pin}spirational Challenge #277 and there are only a few hours left till it closes so I'll be brief!  These electronic gaming accessories are from Yvonne Creations.  The card isn't quite finished yet, I need to give everything another coat of glossy accents.  And the photo is terrible so I'll take some other photos later with some closeups of the buttons.  This particular lad loves his Minecraft but for my son's birthday in July I'll probably make up a Plants vs Zombies theme - that's the only Zombie game that I approve of him playing.  And I also have another order from one of my friends for her son so this set will get plenty of use I suspect!
Here's the {Pin}spirational photo so you can see how I was inspired - Headphone, Playstation Logo on the Cup and of course the iconic Playstation Buttons (which unfortunately aren't very clear in this photo and they were devilishly tricky)! 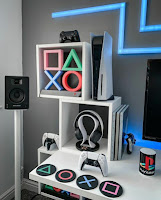 Here are the other Challenges I'm also entering 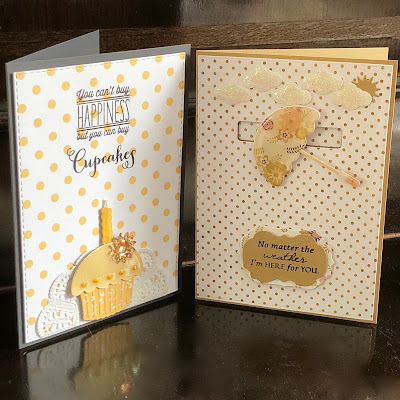 When I first saw the Marianne D cupcake set, the rounded top reminded me of an old-fashioned parasol, so when Twofer Challenge #38 announced a theme of cake/cupcake you'd think I'd have been one of the first to enter instead of chasing the deadline - such has been my week(s)!

It's all good, I've just been busily making cards to raise money to protect the children and staff at the orphanage in Tanzania - the Ilula Orphan Project.  I've just had two orders come in but I'm determined to finish these cupcake cards first! 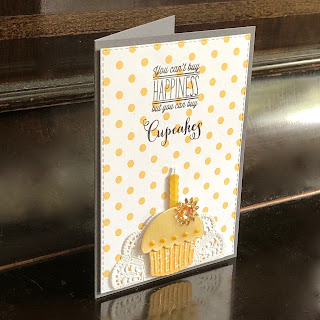 The first is a traditional cupcake.  While searching for some bling, I found this little bejewelled sunflower which complemented the icing perfectly so I stuck it on.  I've also "glazed" the icing and candle with some glossy accents.  I chopped off the die-cut wick from the candle because I always think a little real string makes for a more realistic wick.   The sentiment is from Verve Cupcakes. 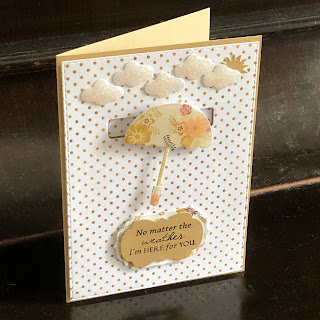 The second card uses the cupcake top as a windswept parasol in a spinner card.  After umming and aahhing for a while, I went with this sentiment from the WPlus9 Pretty Patches Umbrella set.

Here's a little video of the card in action - honestly I could play with these spinner cards all day! 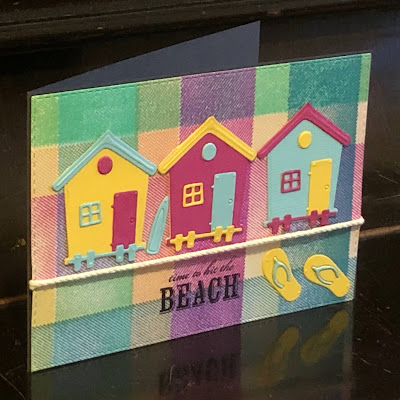 I was looking through some of my older cards on the weekend and found this one from 2012.  Normally when I look back that far I cringe but I rather admired the plaid background and wondered if I could do even better now that I have a stamping platform.  Maybe it's because my ink pads are a little dry but it was hard yakka (that's Aussie for work).  For a start there were 2 stamps, 5 colours and 12 stampings (with cleaning required in between), but each stamping took 5 or 6 goes to get a clean image.  Even now there are patchy bits and I could have done better with my stamp aligning (don't look too close).  I still love it though!  It reminds me of a picnic rug!  And I thought it would be a perfect backdrop for these beach huts.  I cut the hut bodies, roofs, doors, windows and pylons (Alexandra Renke) in three colours and then set about swapping the elements.  The surfboard was also in the set so I cut one in blue and propped it against the pink hut.
I love these summer colours and this cute little scene!  The thongs (sorry) flip-flops (Alexandra Renke Summer Items) must have felt the same way because I found them taking tentative steps towards the beach huts for a closer look!
The sentiment is from a WMS set (WMS My Island) from about the same time as the plaid builder (WMS Picnic Patterns).  I loved Waltzing Mouse Stamps and couldn't wait for the new releases to come out each month!  Based in Northern Ireland, there were no duties and very reasonable postage (usually free) and absolutely brilliantly designed sets that worked well with each other!  I was devastated when Claire closed the shop - such a talented artist!  Still, at least I have most of her sets and will make more of an effort to use them!
I'm entering the following challenges


Thanks for stopping by, I hope you enjoyed your visit.  If you leave a comment, I’ll be over the moon!  I’ll also know you were here, so I can check out what you’ve been up to and we can get better acquainted! 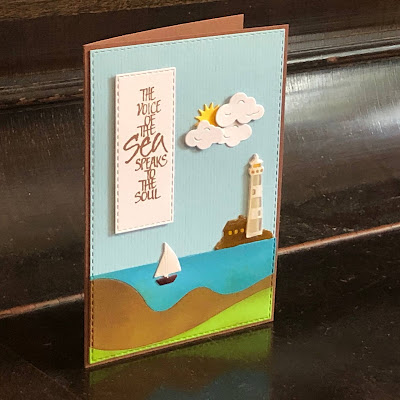 This card is for someone who loves the sea but is stuck in a landlocked country!
I used a very old sizzlit decorative strip die for the foreshore.  It creates a three-part border so I cut it from blue, brown and green card stocks, reassembled them and distressed the edges a little for some depth.
I used Frantic Stamper Village Sky to create the partially cloudy sky.
The sentiment is from Crafty Individuals.
The lighthouse (from an unnamed set I bought at a craft fair last year just before the world stopped) was cut from brown and white card stocks.  I cut the lighthouse away from the brown one and replaced it with a white version.  I cut a second white light house because I wasn't happy with the way it looked and laid it over the first, which made it look like it was in the foreground.  I coloured the white "windows" yellow for the house and light grey for the lighthouse then reinserted them.  Then applied glossy accents for shine and dimension.  The sailiboat is from an unnamed set I bought online a few months ago.
I'm entering the following challenges
Thanks for stopping by, I hope you enjoyed your visit.  If you leave a comment, I’ll be over the moon!  I’ll also know you were here, so I can check out what you’ve been up to and we can get better acquainted! 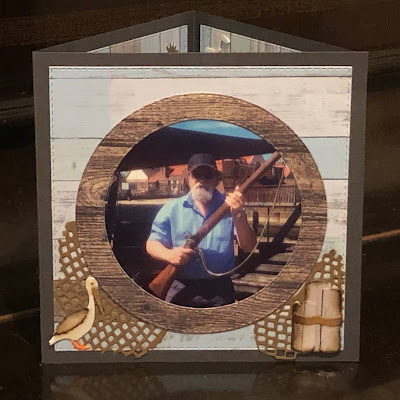 I finally finished this mini album I made to celebrate a significant birthday my hubby just celebrated - it actually started out as a card but I got a bit carried away.  The photos were taken on our last family holiday when we went over to Scotland for our eldest son's graduation ceremony.  We spent a day at the National Museum of the Royal Navy in Hartlepool on the way back which is where most of the photos were taken.  I'd like to emphasise that that musket is not functional!
I started with a "porthole" cut from a woodgrain patterned paper and his favourite bird - the Pelican (Cottage Cutz) and a few scraps of fishing net (Amy Design).  At that point I thought it might be nice to insert a photo rather than create a seascape inside the porthole and the idea for the mini album took hold!  Here's a closeup of the pelican - I cut him from white card stock, coloured the feet orange and used distress ink on the wing and beak. 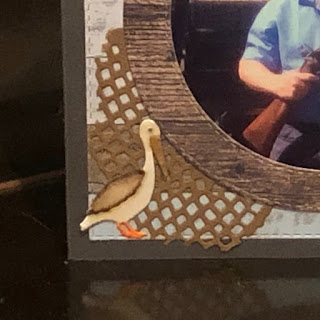 Inside are photos of our three boys and one of me (pretty rare as I'm usually trip photographer).  I cut some sea gulls (Frantic Stamper) and a golden sun (Village Sky also from Frantic Stamper) and some other maritime themed die cuts which were from a die set I picked up in Dortmund at a craft fair.  My husband is an old sea dog - the son of an officer of the Royal Australian Navy - so I'm always on the lookout for anything nautical. 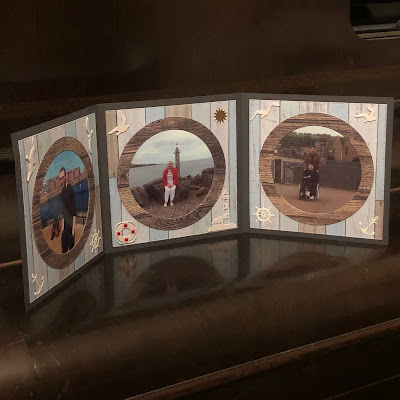 On the back cover I framed a photo of my hubby and our youngest son in front of some pretty impressive rigging. 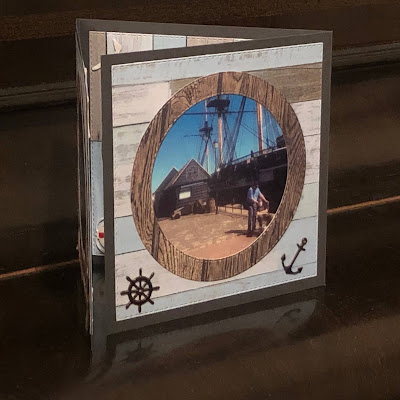 I'm entering the following challenges
Thanks for stopping by, I hope you enjoyed your visit.  If you leave a comment, I’ll be over the moon!  I’ll also know you were here, so I can check out what you’ve been up to and we can get better acquainted! 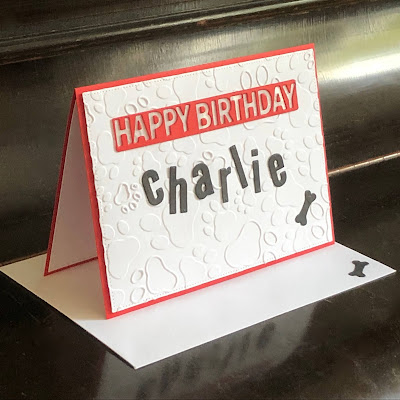 This is a card from a four-legged friend for her master's birthday!   The white card stock was embossed with a Darice Embossing Folder.  The Happy Birthday came from a Sizzix Thinlits set (Female Occasions).  I used the negative and added a piece of acetate behind so I could stick in the little bits from the As, Ps, B and D (I can't stand negatively die cut letters without the little bits reinserted) - I wasn't sure those little pieces would stick well to the uneven surface of the embossed background!
The bone is included in a Marianne D die set (Scotty Dog),  The Scotty dog itself did not resemble "Misty-No" at all so did not get used.
She asked me to sign the inside for her 😉 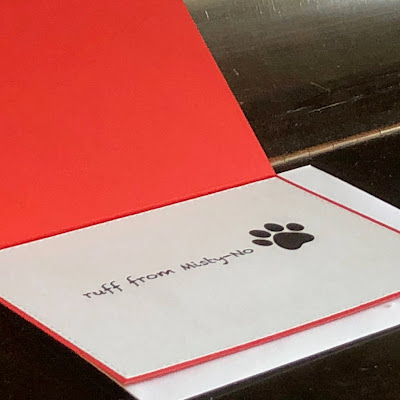 This card will be bounding over to the following challenges