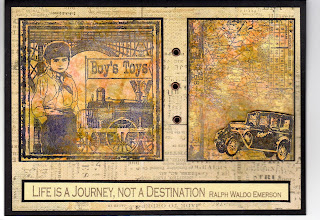 I made this card for my dad. He was 86 this month, and I'll be seeing him in just a few weeks now (which is why I didn't fuss too much about missing his birthday). I haven't seen him since January 2008, and Simon hasn't seen him since July 2007. We had thought Simon travelling to Australia was too dangerous, but as he has been seizure free for almost 10 months now (touch wood) we decided to risk it. I wanted to surprise my dad, but mum just couldn't keep the secret (she was so excited when I told her we had decided to make the trip).
I created some background paper by using alcohol inks (Salmon, Willow, Sandal and Gold), then stamped the 2 images using black archival ink. I was much happier with the alcohol inks this time. The colours are lighter and I think the gold helped to lighten it even more. The images aren't lost in the background here. The 1st image is from Crafty Individuals (love their stamps), and the 2nd from Stampers Anonymous (borrowed from my good friend Lena). The quote was created on the computer. All three were mounted on black card and then on a K & Co Mat sheet, then on a black 5x7 card.
Posted by Kate at 17:39 No comments: 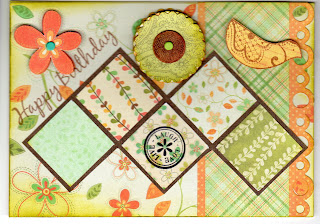 This was mainly an experiment using paper blocking techniques. The Papers are from My Mind's Eye Wild Asparagus Collection.
Jaine had made one of these flowers last week when I was there. She made hers from distressed book pages. I decided to try and coordinate with the Wild Asparagus papers. I cut 10 of the smallest Spellbinders Petite Scalloped Circles, squeezed them together using a faux washer and brad on the top and fanned them out to give them a bit of volume.
I'm not really that happy with the card, it's too unbalanced. Unfortunately I kept trying to fix it as I went along. If I have the time I'll redo the card, but I probably won't have a chance to do that as time is running out before I go to Australia, and it would be a shame to waste those pretty papers.
The little bird (which should have been further south and east) is from a clear Basic Grey stamp set. I stamped the legs on the card and stamped the body in one of the coordinating papers and cut it out and attached it above the legs using foam pads to give it some dimension. Unfortunately I had already stamped Happy Birthday on the left, otherwise I would have repeated this process and done the same on the left. In fact a few of the birds climbing up and down across the top would have been cute. The only thing I could think of to balance the bird was to cut out another of the flowers which was on the background and place it on foam pads to give it a bit of dimension. This made the card far too top heavy. The small "Laugh, Live, Love" stamp - an attempt to balance the top heavy card (not nearly enough though) was from the Circles stamp set from Kaiser scrapbook. I did try to peal off the little mosaic centrepiece so I could try repositioning it further down the page but it started to tear the backing paper underneath - trust me to attach it too darn well.
Any simple ideas (which I might have in my stash) to balance the card would be appreciated.
Posted by Kate at 10:40 No comments: 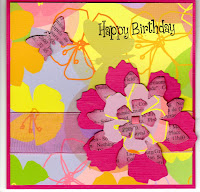 I also created this card on Friday in Jaine's Basement. I finally got my hands on Tim Holtz Tattered Florals Die. The Alteration dies and Embossing folders are so hard to get hold of in Europe. Fanciful Flight looks interesting, but as I go away in 4 weeks for the summer, I may as well wait - hopefully the demand will have died down by September.
The background paper is from Rayher, which I coordinated with some hot pink cardstock and old newspapers (they do come in handy) attached to some firm cardstock and distressed with worn lipstick distress ink. The top left corner looked a little empty so I punched out 2 butterflies and attached one on top of the other along the body, so the wings can sit up.
Posted by Kate at 09:22 No comments: 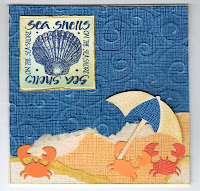 I had a lovely day on Friday in Jaine's Basement.
So nice not to have to rush off to pick up Simon and I always get plenty of inspiration from watching Jaine work.
I created this card using the stamp on the cover of the Craft Stamper Magazine - love this mag !
Posted by Kate at 09:12 No comments: 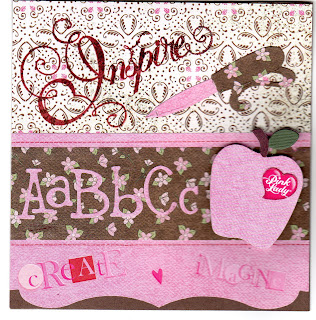 This is the 2nd "Apple for the Teacher" Card I created. I used different papers - the background is from the Basic Grey sultry Collection, but the others are from the Paper Pizazz Girls to Women book.
As I said in the last entry I ran out of the Inspire rub-on, so I used this stamp from the Basic Grey set "Inspire Me".
The top right corner was a little empty so I used this die cut of a pen from the Sizzix Original die Telephone and Diary. 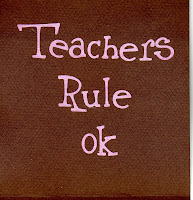 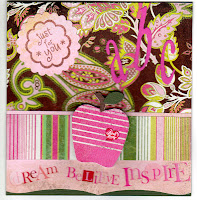 I've created this card for my sister-in-law. She's a teacher so I thought an apple for the teacher and all that. She also loves to wear pink so I thought the Pink Lady was particularly appropriate. I have a friend with a birthday next week and she's a teacher too so I might create another one for her. Unfortunately I don't have any more of the "Inspire" rub-ons so I'll have to improvise with a stamp - watch this space. I picked up these rub-ons at K-Mart years ago. I'm going back to Australia this summer, who knows I may find some more.
The papers are from Basic Grey's Sultry Collection. The Apple is a Small Sizzix Original. The Letters were from Sizzix Retro Metro Alphabet Set. I downloaded the Pink lady logo from the internet.
Posted by Kate at 00:17 1 comment: