Christmas Early - well not yet anyway

Yes I know I said I would try and get a head start on the Christmas cards this year.  Well so far this is all I've managed. My new Christmas ornaments stamp set from Waltzing Mouse Stamps and the spellbinders die which it complements came during the school holidays but so far this is all I have managed.
I had an extra piece of alcohol inked background lying on my desk and I couldn't resist having a go - can't say I'm disappointed, I'm looking forward to putting this into a card or maybe I'll just hang it on the tree come December.
Waltzing Mouse has a Christmas Challenge each month and I'm looking forward to joining in the fun soon.
The solid design of this stamp is not ideal with an alcohol inked background which has a mixative in it (in this case pearl) as the mixative tends to resist the ink as you can see.  I don't mind the effect it gives but you may prefer a crisper image.
Posted by Kate at 11:18 1 comment: 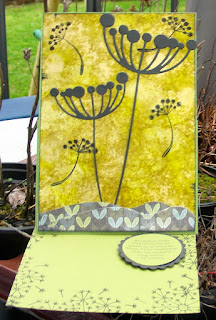 I made another dandelion card - this time an easel card and I have included the quote from D.H. Lawrence.
I'm not sure what I'll use it for yet, perhaps my mum's birthday as she loves green.
The inside was stamped with a dandelion stamp from Hein Design - picked it up at Dortmund as well.  Obviously I had this die on my mind while I was at Dortmund. 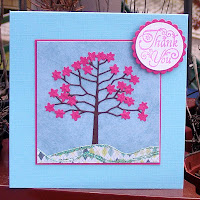 I wanted to use my new Twiggy Tree die from Memory Box and I couldn't think of a better idea than making a Thank You Card for my friend Sonya whose mum very kindly took delivery of some recent orders I made and who transported them back to Luxembourg for me.
I was inspired by the plum tree outside our kitchen door, which was recently covered in the prettiest pink blossoms.  They're only a memory now as is any hope of spring - it's been freezing here.
Mind you it's all relative - when Andrew was talking to his mum (in Australia) yesterday she complained about how it was freezing there.  He asked her what the temperature was and she replied about 18 - it was 3.5 here with a wind chill factor to knock it way below that.
So here's to a hasty return to Spring.
Posted by Kate at 10:26 No comments: 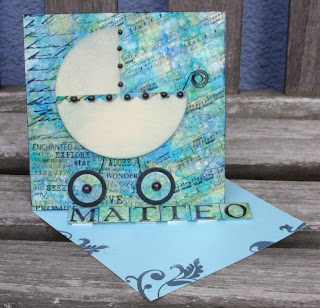 I created this easel card for a new baby born to friends.  The alcohol ink used in the background were pool, sandal and stonewashed with a pearl mixative - which gave it a beautiful shell-like appearance (as usual the photograph doesn't do it justice).  Stamps used to overstamp the background were from Stempelwinkel and Crafty Individuals.
The buggy was made up from various circles cut using spellbinders and wire.
The name was stamped with a very old alphabet set from PSX, and punched out with a square punch - my large square spellbinders were too big and the name wouldn't fit on the card.  The small squares are on my wishlist but then so are many other spellbinders sets.
The stamps used on the inside were from Inkadinkadoo.
I'm intending on printing a little label with "welcome" on it to hang on the handle of the pram.
Posted by Kate at 17:26 No comments:

A Mini Album for Gavin's Birthday

Gavin turned 19 a few weeks ago and I made this mini maze book album for him.  The theme was Travellin' Gavin and I chose holiday photos from babyhood to manhood to let him see what a lucky guy he is to have seen all the places he has (even if he didn't think so at the time).

I saw a video of a woman's wedding album in which she had crammed a lot of photos into a small space by folding out photos and having photos on the reverse side, and I was inspired to do something similar.  Unfortunately the maze book format doesn't lend itself to this as well as a magic box and was somewhat bulgy by the time I had finished.  Perhaps I had better redo it at a later stage in a magic box format.

With the maze book there is a pocket on each page, into which I fitted another mini album.  Pictures 3 and 4 show the 1st mini album I made.  I was extremely happy with it, however I realized that if I made them all in this format the darn thing would never close.  I even added some journaling - a first for me, but I felt it was important for Gavin to have some sort of story to accompany the pictures.
I couldn't resist using alcohol inks to create some marbled backgrounds and stamping on these. The front cover was a stamp from Stempelwinkel, inside cover stamps were from an Isabelle Norris set, Mini Album Cover was from Crafty Individuals.  The back cover stamp was from a Darkroom Door set.

These 2 photos show a typical page layout - small photo on each side which open up into wider shots.

The last page was pretty clever (even if I say so myself) and involved a 3 dimensional fold giving a long portrait, a wide landscape and a small square photo.

I must say I really enjoyed putting together this album, and not just because it brought back some great memories.  I hope it inspires you to think in more than 2 dimensions.
Posted by Kate at 19:17 1 comment: