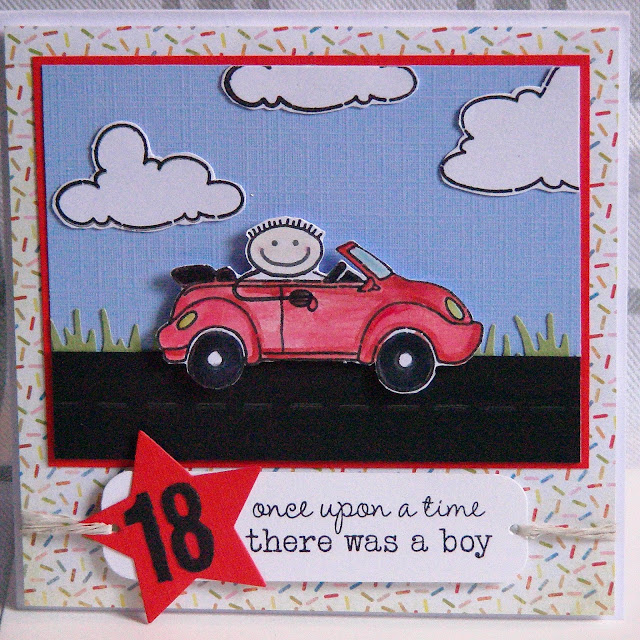 18 is the legal age for a driver's licence in Luxembourg so when my good friend Maggie said she needed an 18th birthday card for her son I immediately thought of this guy and his cool convertible from WMS Half Pint Heroes.  Of course at 18 her son is hardly half pint, but nevertheless I thought it might make a cute but not too cute birthday card for an 18 year old boy young man.

This set is so much fun to use - you can select from a few different heads so as to best resemble your hero, and I just love the story-telling sentiments that come with the WMS Half Pint Hero additions set.   The inside of the card reads "and he was amazing".   The clouds are from the female equivalent set WMS Half Pint Heroines.

I wonder if Claire would consider adding another addition to this delightful collection of sets with the sentiment "and he/she grew up too fast" - I'm feeling pretty nostalgic at the moment with my eldest about to strike out on his own and my 2nd son not far behind him.  Even my youngest will turn double figures next birthday.  Luckily I haven't had the time to age at all LOL !!!

Thanks for stopping by :) 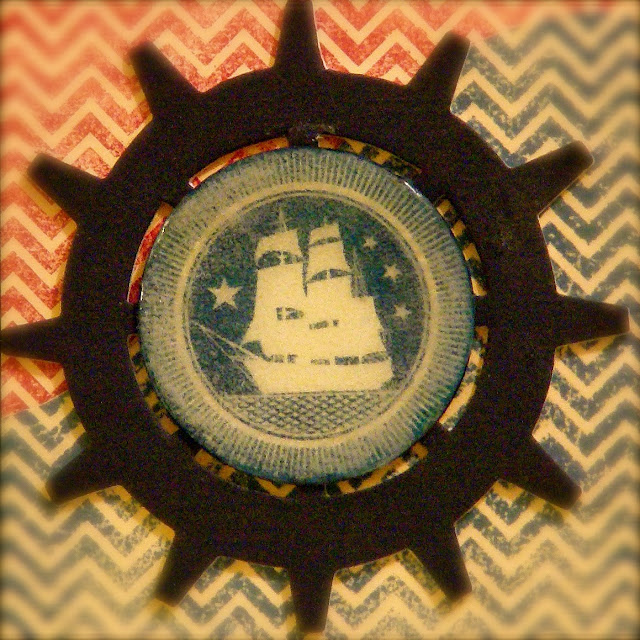 After last month's Waltzing Mouse Pyjama Party I decided I could not live without the WMS Ocean Bound set any longer - and can you blame me.  Not only is it chock full of lovely images but the sentiment are just fabulous too.

I started thinking about this card last Saturday as soon as the first Waltzing Mouse Fanatics Challenge was announced - I was desperate to play along as I've really missed the weekly challenges and think it's wonderful that Tara and Deborah have started up these challenges. 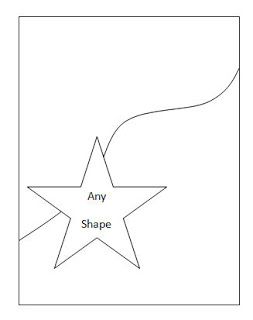 Initially I just had the idea of merging the two different coloured Zig Zag Stripe backgrounds together with no real purpose for the card.  My plan was to break open the new Ocean Bound set which had arrived the day before and experiment.

I had the Tim Holtz Gear cut out from a previous project and I thought it kind of resembled a ship's wheel and would make a good mount for this image from the set.  After cutting out the image with a Spellbinders Circle I covered it with Versamark and UTEE'd it.  I loved the effect - especially mounted on the "ship's wheel". 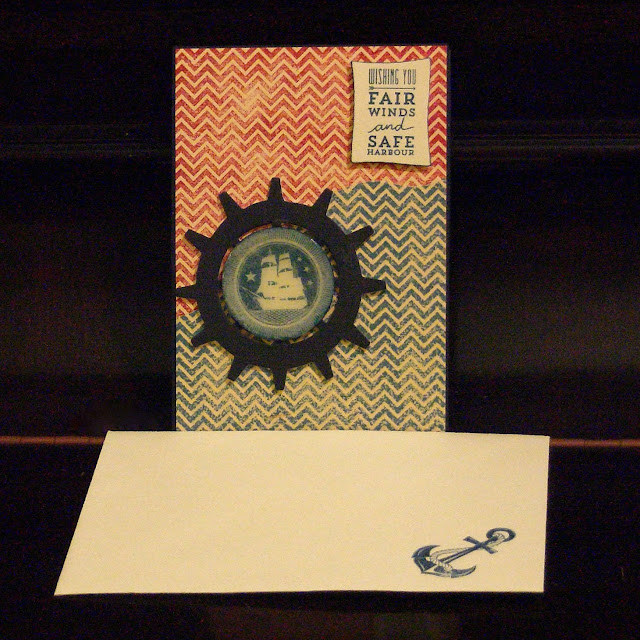 Next I went searching for a sentiment and my eye settled upon this Fair Winds sentiment again from Ocean Bound.  I used a really old Spellbinders nestability die to cut it out so that it resembled a ship's sail.  Now the card had a purpose - my son leaves to study in London soon and this sentiment sums up all my anxieties about this move of his. 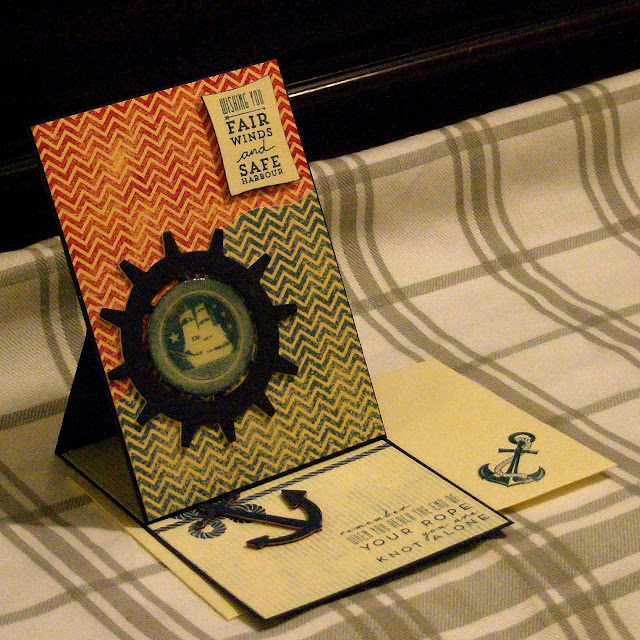 I wanted to make it an easel card so I cut 6 die cut Sizzlit anchors and layered them together so I had a stopper for the easel card, stamped a WMS Pinstriped Background (I stamped off once so it wasn't too heavy) and a couple of images and another sentiment from WMS Tying the Knot.  Naturally I couldn't leave the envelope bare and stamped this gorgeously detailed anchor from Ocean Bound.

I like to think that when Gavin is settled in London he'll have this card in pride of place in his digs and think about his old mum from time to time, 'cause I'll be thinking of (and worrying about) him.
Posted by Kate at 01:20 11 comments:

The World at Her Feet 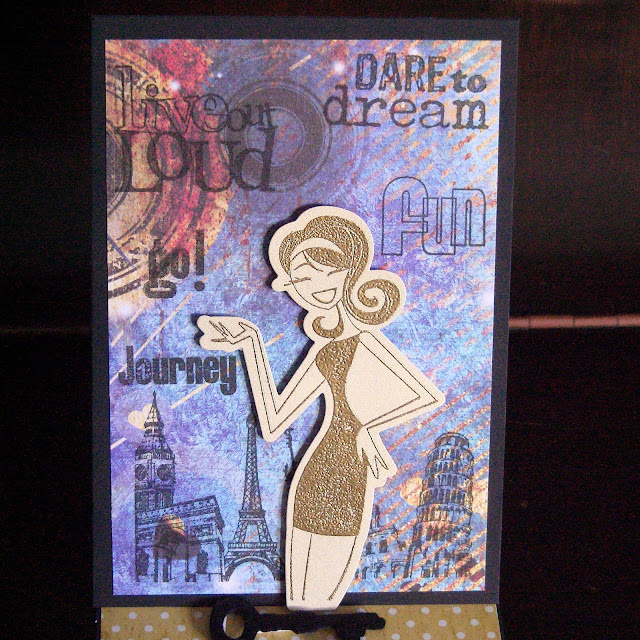 I made this card for the daughter of a friend of mine who is turning 21 soon.  This funky chick is from a Framelit set I ordered a few weeks ago from Sizzix.   When Ruth told me her daughter is into 60s fashion it seemed the obvious choice.  This set is a doddle to use.  I had my doubts about the Sizzix framelit dies at first as I am a big fan of Spellbinders, but I have to say I'm impressed.  The cutting edge is on the inside edge so there's no more guess work when it comes to cutting your stamped image - what you see is what you cut.

The city icons of the world stamp is from Katzelkraft, and the affirmation stamps are from a Sizzix set (Wish You Were Here) and a Kaiser Scrapbook set (Live Out Loud)

The key was cut from felt and card using a Tim Holtz movers and shapers die.   I had toyed with the idea of hanging the key from her wrist but in the end decided on an easel card and used the key as the prop. 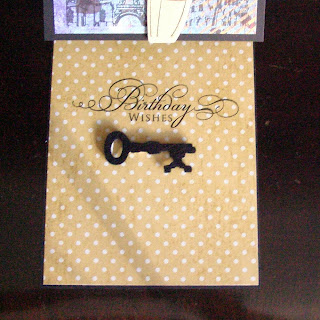 This gorgeous sentiment on the inside is from the WMS Big Day Today set.  Can't wait until I can use this set again - all of the sentiments are sooo beautiful.
Thanks for stopping by !!!

Desperate for a date !!! 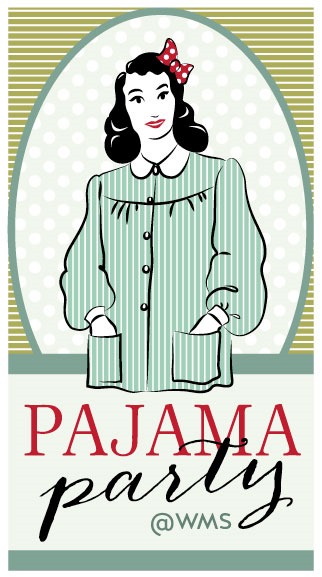 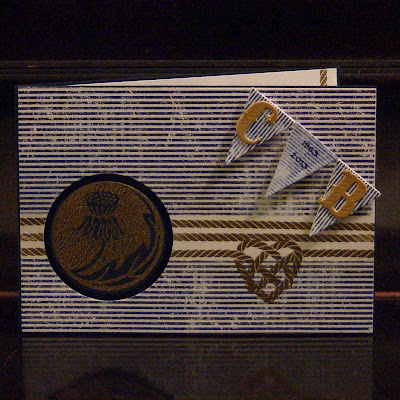 The WMS pyjama party ended up going on for another day (I think Claire and the Mr Linky Gadget had a difference of opinion over the definition of midnight) so you still have a few more hours to play along.

If you were here a few days ago, you will remember I wasn't completely happy with the Golden Anniversary Card from this post.  I played around with the pennants a little and ended up overstamping them with the new WMS Mini Pinstripe Stamp - they looked a little plain as they were.  I had to stamp off once on the middle pennant so the dates were legible through the overstamping.

Computer generating personalised items like dates is okay most of the time but sometimes you just need to emboss, and I think those dates on the middle pennant need to be embossed in gold.

I know Just-Rite have systems for printing monograms and custom messages, does anyone know if there is something for creating dates ?  I'm pathetic at lining up small characters like this, so it would need to be fairly idiot proof !!!   I suppose one of those rotary date stamps you find in office supply stores might be adequate at a pinch.
Posted by Kate at 21:49 2 comments: