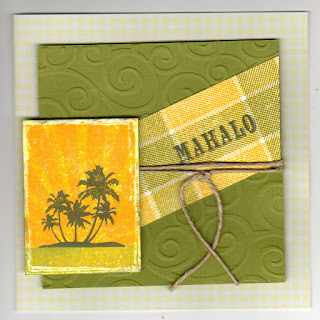 For my dear friend Maggie, for helping me out at Simon's birthday party.  To help out at an eight-year old's birthday party when your own children are twice that age is above and beyond the call of duty.
This card is based on WMSC107.

Stamps used are from the My Island set and Pic-Nic Patterns.  Mustard Seed,  Spiced Marmalade and Crushed Olive Distress Inks were used as well as Slate Chalk ink for the sentiment and palm trees.
The card base was a yellow gingham.
Posted by Kate at 18:48 3 comments: 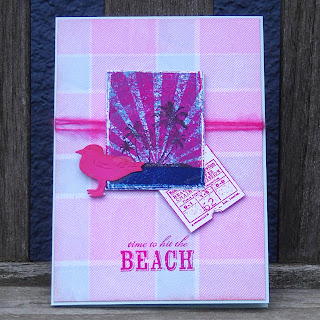 Just one of the many cards I am so behind on.  This for my niece and god-daughter Chantelle.  I imagine that she's looking forward to the end of the Australian winter and the time when she can hit the beach.
She's a surfer as is her fiance - at least when life was more leisurely they were.   They're both training to be teachers and working when they're not studying, so not sure they get much of a chance.

This card is based on WMSC106 rotated 180 degrees.  The background was created with the Pic-Nic Patterns plaid builders using Wisteria and French Blue Chalk Inks.
The central image was from the WMS My Island set, as was the sentiment.  The vintage beach chair ticket stamp was from a Crafty Individuals set, and the little sea gull is from a sizzlit die cut.

Two more cards for the End of Year Rush 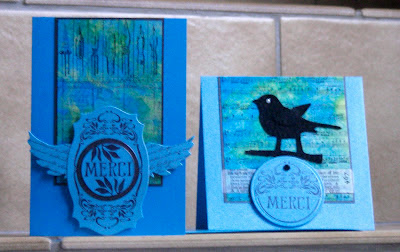 I had two more cards to make for Simon's teachers.  The left most was for his main teacher who is the most wonderful, calmest teacher in the school.  We were very lucky to have her, any other teacher may not have coped as well with Simon's special needs.
The one on the right is for his part-time teacher, who takes him for science and music.  He absolutely adores her and she has said the most wonderful things about Simon.  She has never seen a child come so alive when music is played.
I have always sung to my children even before they were born (captive audience), while breast-feeding (also captive audience), while playing games, feeding time, to calm them down when they were hurt or overwrought, and of course at bed time.  Most of these songs were gentle ballads, so you can imagine my surprise (annoyance even) when at 10 months he started humming "Smoke on the Water" just after his big brother James got an electric guitar - I didn't sing to him as often after that, and when I did I tended to take the tempo up a bit.  He was obviously trying to tell me something ! 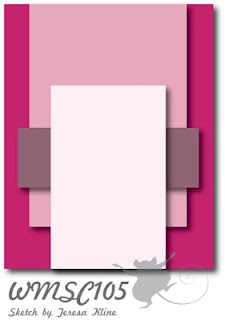 Both cards were based on this week's sketch from Waltzing Mouse - WMSC105.  What can I say - I like the sketch and my own well of ideas is a bit dry at the moment !
The upper panels on both cards were constructed with alcohol inked backgrounds - Sailboat Blue, Pool and Lemonade, and overstamped with Jet Black Archival Ink.  The left with two stamps from a set called Writing Set from Stampington and Company - the nibs and the calligraphy panel seemed perfect for a teacher, and the right with a music score stamp from Stempelwinkel.  On the left card, I thought I would try using a pair of wings instead of a strip to vary the sketch a bit - these were cut using Tim Holtz's Heart Wings die and stamped with a text stamp from Crafty Individuals.  The strip on the right was a piece of Tim Holtz washi Tape.  The black bird on the right card was made from black felt cut with the Tim Holtz Caged Bird die.  The sentiments and labels were from WMS Paris Nouveau.  I don't think I've ever used a stamp set as often and as thoroughly as this one.
Simon's on holiday after today and I have a batch of very belated birthday cards to make so I hope he gives me a bit of a break.  I also hope I like WMSC106 as much as this one!
Apologies for the lousy photograph.  I can't take a decent inside photo and it's been raining cats and dogs here since yesterday afternoon.  Plus I only had 30 seconds to snap a couple of photos before Simon went off to school.
Posted by Kate at 14:26 5 comments: 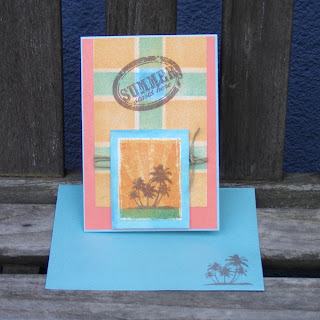 At this time of year I have so many people to thank for their hard work with my darling boy Simon. This card is for Simon's teaching assistant Josie.  Josie has worked tirelessly with him for 3 years now and probably knows him better than anyone else apart from me.  We had reservations about the local school system but he loves it there, thanks in no small part to Josie.  I have to say that I too feel better about leaving him with someone as competent and experienced as Josie.
Simon has had some wonderful therapists and teachers (and doctors) throughout his short but eventful life, but I don't think any of them has influenced him as greatly as Josie.
I loved this week's sketch at WMS so I thought I'd use it again - plus it lends itself perfectly to this stamp set from My Island.
I just love the plaid background.  When I saw one of the cards on Claire Brennan's Blog where she had created a plaid background for one of her My Island cards, I knew I had to have this set as well as My Island - I had planned to get this next month, but decided I couldn't wait.
The plaid was created using Broken China and Wild Honey Distress Inks.  I used these in the Island panel too with Spiced Marmalade and Memento Rich Cocoa for the palm tree.  I was only playing when I started the panel so I didn't measure, I just "eye-balled" it.  It's not perfect but I think it's okay and I'm surprised at how easy it was to create the pattern.  I used the two different sized plaid stamps in the set and had them mounted on two separate acrylic blocks.  I then just stamped alternating between the two stamps one with Broken China and the other with Wild Honey - no in between cleaning, no fuss, no problems, easy peasy.
Posted by Kate at 08:12 8 comments: 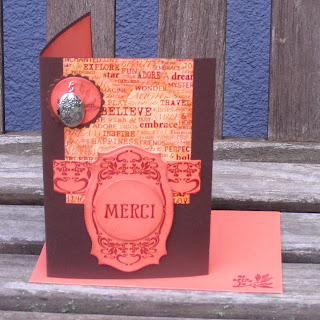 I made this card for Simon's speech pathologist, to thank her for all the work she has done with him throughout the year.
Again my Paris Nouveau set was put to use, for the Merci, the border strip, the label and the flower spray.  Crafty Individuals CI-258 (it seemed perfect for a speech therapist) was stamped onto an alcohol inked background.  I tried to replicate a coral/pink alcohol inked background I made previously, but the colours were too warm so I ended up going for a brown/orange combination rather than coral/pink card.

I used Waltzing Mouse Sketch 105 as inspiration for the design of the card.  As you can see the little circle on the upper left was not part of the sketch, but I wanted to add this locket which has a picture of Simon inside. It seemed to need some form of a mount and the mount didn't look balanced within the panel.  Behind the locket it reads "More than Words".  I'm not entirely happy with it but I had to deliver it first thing this morning so I had no time to tweak it.
Posted by Kate at 10:49 10 comments:

Thank You For The Music 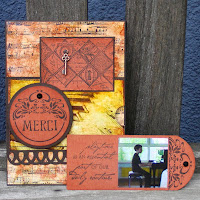 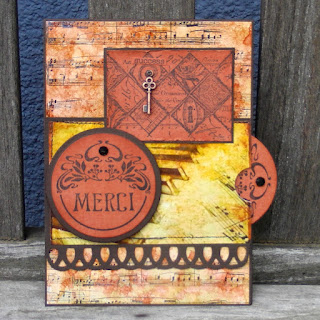 I made this card for Gavin's piano teacher.  Gavin will have his last lesson next Monday and Octave has been teaching him, pushing him, cajoling him and when necessary, threatening him for a decade now. 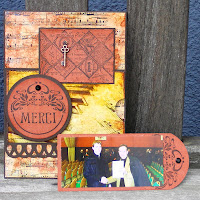 Octave has always demanded excellence and Gavin (who like most boys is naturally lazy) has usually managed to pull the cat out of the bag, even if it has only been at the very last minute.
In his final exam he received the highest mark in his group which was extraordinary considering just two weeks before Octave said he wouldn't be able to sit for the exam because he was so poorly prepared.
I don't have many photos of Gavin playing the piano but I managed to find two.  One taken when he was very young (could have been his 1st concert) and one taken a few years back with Octave at a diploma issue.  I thought it would be nice to share these with Octave so I created a pocket and a tag with the photos.
The background was created with alcohol inks and overstamped with a sheet music stamp from Stempelwinkel.  The piano collage was from the internet.  The rectangular collage was a portion of a wood mounted stamp from Stamper's Anonymous.  The word "success" (just above the key) was printed using the American Typewriter font.  The other stamp (used on the tag as well as the sentiment) was from the Paris Nouveau set from Waltzing Mouse Stamps.  All images were distressed with Mahogany Distress Ink.  Although this stamp set was designed for the Spellbinders Labels 25 set, there is this one stamp which can also be cut with a circle.  This set has got to be one of my faves.

The design of this card was based on WMS sketch #104 the first I have ever completed -  I hope it's okay that I've used a circle instead of an oval.
Posted by Kate at 19:35 8 comments: