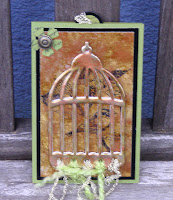 Another Double Slider - using the Tim Holtz birdcage and some alcohol-inked backgrounds. The Cage was cut from foam backed aluminium can - don't you just love those sizzix dies they'll cut anything. The cage and front panel were coloured with Copper, Oregano and Willow alcohol inks. The front image is from Crafty Individuals, the top image is from Stampers Anonymous and the bottom image is from Paper Artsy Hot Picks.

The thing I really love about these double slider cards is that your sentiment can be split across 2 canvases or even 3, and these are "revealed" slowly.
This is for my gorgeous niece Natalie who along with any other talents, has a very sweet singing voice.

I thought I had better add this card to the blog even though it was a bit experimental. My husband asked me if I could make a tractor card as he wanted to thank someone for fixing Simon's toy tractor. Can you believe that even though my little darling is crazy about them, I had neither a stamp or a die cut of a tractor. So I put my thinking cap on and went looking for images on the internet. I imported a pretty ordinary black and white drawing into Photo Shop (plus a few pretty papers that could be used for the ploughed field and the sky) and produced this scene. Within photo shop I cut out the front wheel and printed this as a separate image. I then printed the image and the front wheel (I like to use Word so I can be precise with my sizes), cut out the front wheel and turned it into a penny slider element, and produced this little red tractor whose front wheel has a mind of its own.
Posted by Kate at 15:45 No comments: 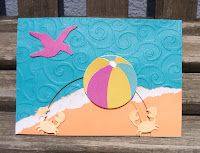 Just finished this Penny Slider Card. When I first saw a penny slider card I thought of this Ellison thin cut beach ball, and imagined a multi-coloured one spinning around the page - but balls don't travel in circles like the moth in my 1st penny slider, and the idea of a beach ball just sliding back and forth seemed so boring. So I got to thinking, could I create a semi-circular or semi-ovoid track using either the Spellbinders circles or ovals? Sure the ends would be open but that could easily be overcome by placing something either end to stop the ball. Then I thought of using a crab at either end which would not only stop the beach ball falling out but would look like they were tossing the ball back and forth. The idea of this idyllic beach scene has been in my head for a few days now and I couldn't wait to try it out (I just had some things which needed finishing off first). As I needed to do an instruction sheet on the Penny Slider Card (for the group on Saturday), I documented the construction of this card and killed 2 birds with the one stone (I hope one of them wasn't that lovely seagull who seems to want to join in the crabs' fun)!

I was so eager to try it out though, that I gave no thought to printing the sentiment before I decorated the card front. The inside should read "Have a ball on your birthday" or something to that effect (yes I know it's corny, but that's me).
Now I'm confident penny slider cards work with open ended tracks, more intricate cutting patterns can be used - the possibilities are endless. I'm thinking of a ship on the high seas or maybe something falling down some a set of stairs.
I've added a video so you can see the card in action. These cards should really be called penny twisters or penny spinners. The image doesn't just slide, it twists and spins - beautiful to watch and great fun to play with (though you really need 2 hands to keep the ball in motion and I only had 1 as I was holding the video camera with the other)

Finally finished my 1st Diamond Fold Card. Can't say I'm really all that fussed about the Diamond Fold Card - a lot of paper for a very small card. It would have been 4"x4" (10cm x 10cm), but I extended it a little by matting with card and co-ordinating paper.
The stamps are from Kaisercraft and My Mind's Eye. The paper is from K & Co. and is double sided. There is a little recess in the back where I intend to write birthday greetings. I might add some ribbon as well to tie it closed.
Posted by Kate at 03:32 No comments: