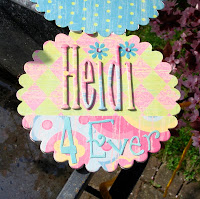 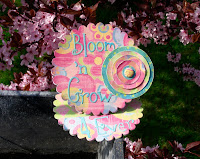 I just loved the Easel card on the front cover of this month's Craft Stamper so I thought I would have a go and combine it with 2 challenges from Scrappy Accent's Cyber Crop over the weekend - Circles and Lollipop Flowers. The lower half of the inside of the card has a raised edge which supports the hinged Card front. Bit tricky with a scalloped circle though - the scallops never quite match up. Pretty papers aren't they - Retro Floral from PaperMania. I do like making cards for little girls. Hope Heidi has a lovely party on Saturday ! Hope this gorgeous weather holds too. BTW, anyone else not missing the planes ?
Posted by Kate at 11:08 1 comment:

on during the Easter break. I bought some gorgeous stamps from Blade Rubber - located just 2 blocks from our apartment. The card featured here includes images from the Non Sequitur sheet Roaring Twenties. My hands have been itching for some time to get really dirty with some alcohol ink. I bought some years ago at a craft fair and my initial attempts at usage were not great so I put it aside. However I have been watching videos on the net of the guru Tim Holtz and loved his polished stone effect background overstamped with Mona, so I thought I would give it another go.
I must say I did have some fun creating the backgrounds, but they were all so dark that the images were barely visible. My attempts at lightening with the blending solution were not successful either. I think I need some metallic mixative, maybe some lighter colours and loads more practice. I had also forgotten how tricky stamping on glossy cardstock can be. I usually just avoid glossy cardstock but I knew I would never get that polished stone look using anything else, so I persevered. After 20 or so bad images, I had finally steadied my hand enough to get a fairly crisp image I was happy with. One trick I think works (which I noticed Tim doing) is to lift the cardstock with the stamp and then carefully peel it off the stamp. Less chance of smudging that way (who da thunk)!
I should have decorated the plain cream cardstock a little more before I adhered the images but I was really pushed for time. I had to finish Maggie's card that day and I had to clean the
kitchen table (experimenting with alcohol inks was pretty messy) and I had to get Simon to the hospital for a 7pm appointment with Doctor Pauly. Boy does that man work long hours.

The inside I made using Word and the font Type Keys Filled - a free font I downloaded from Dafont.com. The Roaring 20s sheet actually had small typewriter key stamps for the alphabet and
numerals but there was no way I was going to stamp this sentiment. The sentiment is my own and I'm sure Maggie will get the deeper meaning - not just the trite but true one.
I was having a discussion not so long ago about how when you really know someone (and like them) you don't notice anymore whether they're having a bad hair day (or week) or whether they're just wearing their comfy clothes, or whether they've put on a few pounds. I suppose you see into their soul and love them for who they are. So Maggie this card is for you. You are gorgeous and extremely stylish (as anyone who knows you will vouch), but even if you weren't I'd still think you were! Lord what a useless friend am I - you're wasting your time there girl!
Posted by Kate at 13:04 2 comments: