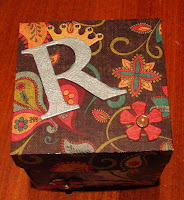 This is my latest creation. My friend Ruth turned 50 yesterday and I wanted to make her a really special card. In the end I decided on an explosion box. We girls are going out on the town tomorrow night and I thought she might like to store any pictures from the night inside - really make it a night to remember. 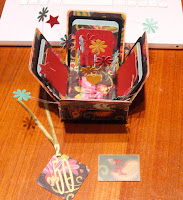 The patterned paper is from My Mind's Eye Bloom and Grow Collection. Some of the embellishments have been punched from Coredinations Gemstones collection, but most of it was just from stash - I just wanted to highlight the rich colours in the patterned papers.
The thing about explosion boxes is you always have those spare cut out pieces left over, so I created a book mark with one of these (the inverse has that famous quote from Mark Twain about age being an issue of mind over matter). I also created a teeny gift card and envelope to put in the centre of the box. 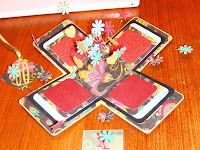 The flowers, hearts and stars are attached using acetate strips (formerly a packing box from a sizzix die). The last time I made an explosion box I used wire stems, but I saw the acetate on other explosion boxes on the internet and thought I'd give it a try. I must say I was pleased with the effect - I love the way they appear to be suspended in mid air.
Of course all the corners have been rounded with the Corner Chomper.

Two more twisted easel cards. The paper I used for the one on the left was rescued from the bin after the last Mosaik crop. It was a perfect match for the blue set of card blanks I bought from Zeeman.
Posted by Kate at 14:37 No comments:

I thought I'd forgotten to take photos of this card before it was given last month. This was for Simon's friend William's 6th birthday (which had a pirate theme). I even made up the goofy rhyme on the inside. In case you can't read his writing that's Simon "signature" on the bottom. 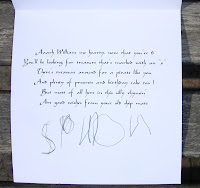 Unfortunately Simon was sick on the day so we couldn't go to the party, and I could only give instructions on "digging for the buried treasure" to a friend who delivered it. William did find the buried treasured and loved the card - in fact he mentioned it last week at Heidi's party when he saw the card I had made for her.

The paper was printed out from an image of shells I found on the internet, the skull is a Sizzix original die, the Treasure Chest is a Quickutz die, and the coins were made by rubbing a 1c coin with gold foil. I wished I had some multi-coloured glitter as I thought this would have looked terrific as the jewels spilling out of the chest. I'm sure I have some somewhere but I couldn't put my finger on it at the time - perhaps if I do make another I'll have more luck !
Posted by Kate at 02:12 1 comment:

I've been a bit lapse lately with my posts. Most of January was written off with vertigo, and February was spent catching up on all the things I should have done in January. I also made a new years resolution to focus more on scrapbooking this year and less on card making. However I've only finished 1 mini book with 2 other "works in progress".
Anyway June is fast approaching and most of our family have birthdays between June 12th and July 16th so it's a busy time for me. Usually I start panicking as soon as I see the poppies blooming (my father is affectionately know as Poppy to his grandchildren and his birthday is June 14th). However because we've had such a mild spring they're already bursting to life and I've started panicking early - probably a good thing as I'm far too much of a "last minute" person.
The timing has worked out really well as next month I am giving a talk about card making to our local craft group. To be honest I'm a little nervous (which is really bad because then I start to talk too fast and nobody will be able to understand me). I thought I'd concentrate more on construction rather than design - that's Jaine's department! We've come up with 3 styles of card which we feel are simple enough to talk about even to complete novices but also have that extra WOW ! factor.
These are
1. The Twisted Easel Card. This is one I made last week for a friend of Simon's. I've since done two others. I finally got to use my new Marianne D birdcage die as well - isn't it gorgeous! The best thing about these cards is that I made them from a set of card blanks I bought in the local Zeeman store for 99c for a pack of 10. The packs come in sets of co-ordinating colours (5 of each) with matching envelopes. Most of the designs I used meant sacrificing an extra card for the die cut and construction of the easel, but that still works out at 20c a card plus adhesives, papers and embellishments. 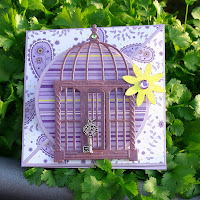 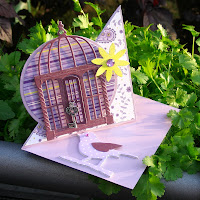 2. The Penny Slider Card. There didn't seem much point taking just a photo of this one - you have to see it in action. I mixed and matched two Zeeman sets to come up with this pink and black card. I had seen others on the internet which had either a horizontal or vertical slot but I thought I'd make my moth circumnavigate the flower. The stamps are from Paperartsy Hot Picks.
As this card only used only 1 and 1/2 cards from the Zeeman set, it was actually cheaper to produce than the Twisted Easel Card, though it did take quite a few foam pads and of course the 2 pennies (1 cent coins).
3. The Double Slider Card. When I saw this technique I automatically thought of this Writing set stamp from Clearly Impressed - it looked so much like a drawer being opened, and I thought of the nibs. I used a Crafty Individuals stamp as well.
I hope these get the creative juices flowing within the group and I can't wait to see what they produce ! Meanwhile it's back to the craft mat for me as I've still got many more cards to make including one for my friend Ruth who turns 50 next week.
Posted by Kate at 20:48 No comments: