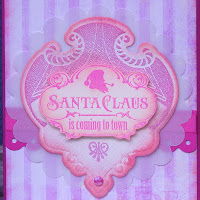 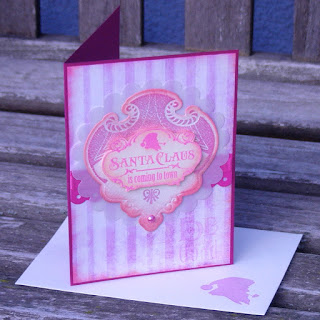 The October Challenge for the Waltzing Mouse Christmas Card Challenge is "Pretty in Pink".  I did already have a pink card from June but I've got so many new stamp sets that I wanted to try out and this WMS Opera set seemed to scream pink at me.  The Santa Claus sentiment and cameo are from WMS Santa's Coming set, which I fussy cut out from the surrounding Christmas bauble. The "BE Good" sentiment on the base of card and the cameo image on the envelope were from this set as well.  Everything was then distressed with Worn Lipstick, Victorian Velvet and Tattered Rose Distress Inks.  I attached the sentiment on foam pads to the curtain image and placed this on a vellum doily.  The background paper is from a Cardmaking and Papercraft freebie paper pack from Raspberry Road Designs.  It's a beautiful morning here in Luxembourg, a little cold at 1℃ but the sun is shining which means I could get an outside pic of my card.

A Bunch of Thank You Cards 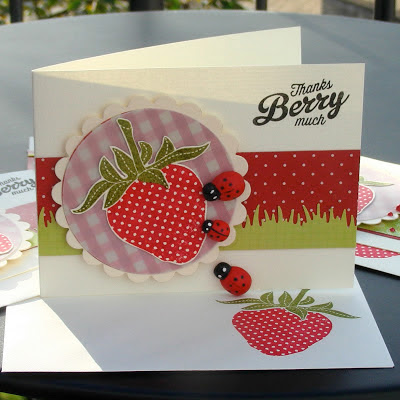 I had to make a few thank you cards for birthday presents received and for help and presents Simon and I received while we were in hospital last week.
I love this Big Berries Strawberry and this sentiment which come with it, so I made 4 today with varying degrees of post-friendliness.  This one with the ladybirds is by far the cutest (though the least post-friendly - hand delivery only for this one) so I thought I would feature it here.
The strawberry was stamped with Festive Berries and Peeled Paint Distress Inks.  I used Claire Brennan's neat trick of inking up the stamp with versamark and then the distress ink so you don't get that blotchy look.  I then embossed with clear powder.  I also stamped the envelopes to match. 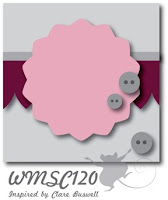 The papers were from a free paper stack from Quick Cards - Summer Goodness by Raspberry Road Designs.  The grass was punched with a Martha Stewart Edge punch.
This is another interpretation of sketch WMSC120 from Waltzing Mouse. 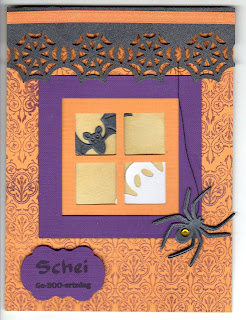 A halloween themed birthday card I made for Simon's friend Louis.  Unfortunately Simon couldn't attend his party as we were just out of hospital, his hair was matted with EEG gel and we were both exhausted.
The wallpaper was created by stamping the border stamp from WMS Victorian Frippery in purple and embossed in clear - I wanted that wallpaper feel as well.
Using various Spellbinders squares and a Movers and Shapers window die cut I created the window and the frame.  The ghost was cut using a Sizzix original and the bat and spider were cut using a Cuttlebug cut and emboss set. If you look carefully you might see the little moon I tried to create through the window by masking and distressing. The spider web border punch is from EK success. 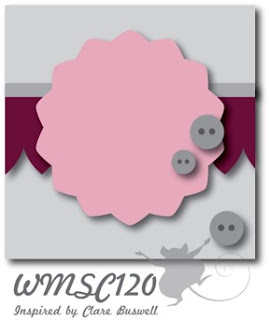 Louis isn't an English speaker so I knew "Have a Spook-tacular Birthday" would have gone over his head, and opted for "Schèi Ge-BOO-ertstag" a corruption of the Luxembourgish "Schei Gebuertsdag".  I thought I was really clever coming up with this until my son James told me that  the word BOO is unheard of in Luxembourgish.  Oh well perhaps he'll get it one day.
I'm entering this in the Waltzing Mouse Challenge WMSC120, though I've taken a fair bit of artistic licence with Clare Buswell's brilliant sketch.
Posted by Kate at 08:38 11 comments:

A special card for a special girl 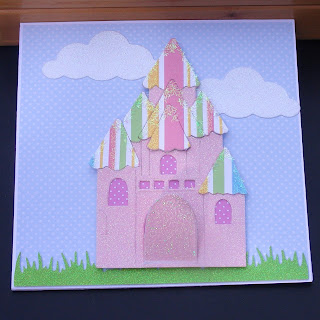 I made this card for Simon's best friend Niamh - for those unfamiliar with Irish names that's pronounced Neev.  When I first arrived here I had had little exposure to Irish names - despite a fairly large Irish contingent in Australia (my sister even did Irish dancing for a while).  I was vaguely aware of the pronunciation of the name Siobhan being very different from what you would expect, but didn't know anyone by that name myself.
Here in Luxembourg I have friends with children named Saoirse, Caoimhe and Roisìn to name but a few and when Niamh was born 8 years ago she was the third Niamh I had met, so I never thought about the pronunciation of her name.
Anyway Niamh had her party on Saturday at a play centre in the city which caters for 10 or so parties concurrently.  The parties are assigned  party rooms but spend most of their time running around in a huge jungle climbing area and are paged at various points to return for food and cake.  Irish names tend to confuse even English speakers so you can imagine what a Germanic/French speaker would make of her name.   Needless to say when Niamh's friends were paged as Nee-am-ha's party - it fell on deaf ears even though it was announced in 3 languages.  To be fair there was so much noise with that many children I could never see a paging system being successful. 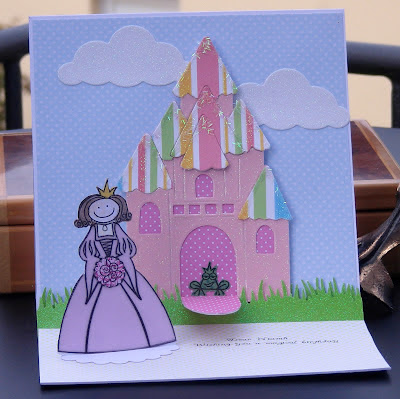 This is an easel card and opens to reveal the following scene - stamped with the Heroines - Fairy Princess set from Waltzing Mouse Stamps.
If you're wondering how the card stays open and the princess stays upright, have a look at this side view.  The grass which holds the card open was easy - I punched a strip of grass, used a bone folder to make a fold line and adhered below the fold line to the base of the inside of the card. I then covered the base of the grass with a patterned paper (printed with the sentiment). 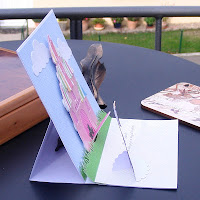 The princess was a little more tricky.  I stamped her on strong white card and also pink vellum (for the dress) and some rose patterned paper for the bouquet.  After dressing her I fussy cut her out leaving enough room below her skirt to partially cut (cutting plates placed beyond her hemline) a spellbinders petite scalloped circle - I thought this would look better than a rectangular or square base.   I then made a fold line just below the hemline of the princess' dress so she could stand upright.  A half circle was then folded in half and one side was adhered to the back of the princess, leaving the other half free to fold out and prop her up.  Hopefully the pictures will explain better than I can.
Anyway she loved it and Simon and I had a great time at her party although somewhat deafened by the noise of a hundred or so children having a good time.

P.S. There is a little stamp which comes with the set which says "Kiss Me" but I thought that was going a bit too far after all they're only 8 years old even though they've been engaged for over 3 years now ;0).