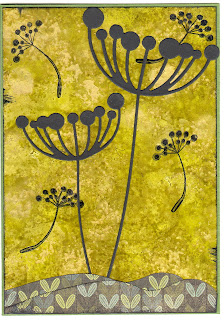 Lena bought this Dandelion die for our scrap group when she visited Creativa Metz a few weeks ago.  I thought it would make a good focal image for a sympathy card, which I've been meaning to make for some weeks now.
The small stamp in the background was bought last week in Dortmund.  The earth was cut from a sheet from a Basic Grey 6x6 Paper Pad - Marjolaine, using the abstract decorative strip die.
I used a couple of green alcohol inks to create the background - oregano, willow and citrus, with a little gold.
Dandelions are so ethereal the way they float on the merest hint of a breeze.  There's something a little sad about this last stage of the dandelion, but also a little hopeful.  As children we always tried to catch them and make wishes.
I found a quote from D.H.Lawrence, which I didn't include as it seemed a little trite for a sympathy card, but I did like the idea of the dandelion negotiating the entire cosmos.
"No creature is fully itself till it is, like the dandelion, opened in the bloom of pure relationship to the sun, the entire living cosmos".
Posted by Kate at 20:08 No comments: 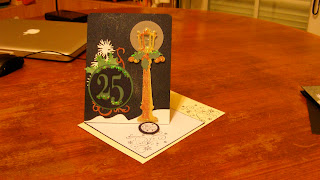 I know it's the wrong time of year to post a Christmas card but I just thought I would share one or two I made last year.  I really felt that I excelled myself last year.  Dies used were Tim Holtz Holiday Lamp Post, Tim Holtz Festive Greenery, Tim Holtz Mover and Shaper "25".  The Snowflake swirl was from an Artemio Christmas set and the small medallion used to stopper the easel card was from a freebie set in Issue 98 of Cardmaking & Papercraft.  The glitter used was from Issue 97 of Cardmaking & Papercraft.
The sparkling background was created using Glimmer Mist and Crackle Accents was used on the lamp post.
I know I say this every year but I think I will get an earlier start on this year's Christmas cards so I don't end up with sleepless nights as the last postal date comes (and goes).  These dies arrived after many of last year's cards were already made so I think I will make at least a dozen to send to friends who didn't get my Tim inspired cards.
Posted by Kate at 11:48 2 comments: 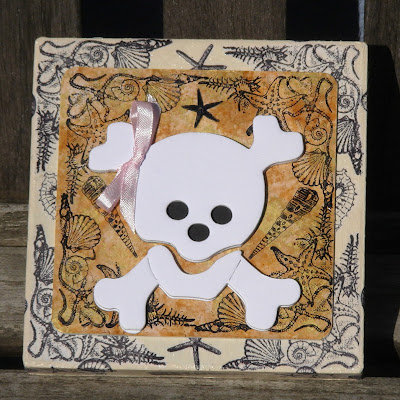 I made this "card" for Simon's friend Charlotte who turned 7 this week and had a pirate themed party.
I wanted to have a cavity for the treasure chest, and I had been wondering for some time how to construct something from card when I happened across this paper mache box, which seemed like a suitable alternative.
The box was gessoed and painted with a cream acrylic.  I then stamped several shell images onto white tissue paper using Archival ink and adhered these with a glue varnish from Decopatch.   As you can see in the 2nd photo there is a treasure chest shape cut from the top so the cavity was visible when the skull was removed. 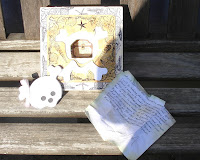 I've always had a passion for stamps of shells and other sea related images, which has not been diminished by living in a wet, cold, land-locked European country for over 14 years now (I've now started collecting die cuts as well).  The shell corner stamp is one of the 1st stamps I ever bought - about 16 years ago, an old wood mounted rubber one from a company called Stamp World (made in Australia, doubt it's still available).  Other stamps which I used as fillers were from a Crafty Individuals Crafty Elements set. 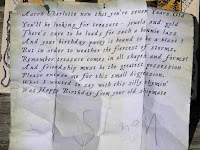 The topper was cut using Sizzix Original "Skull and Crossbones".  The negative was cut from mount-board (it needs to be quite thick in order for the skull to sit in it firmly) which had an alcohol-inked surface - I think I used Sandal, Salmon and Latte inks as well as Gold.  The skull was cut from a double layer of foam board with a piece of black sandwiched in between so the eyes weren't hollow.
Inside the box were 9 little compartments.  The middle one visible when the skull was removed had a die cut treasure chest in the bottom - cut from brown and cream coredinations card using a Quickutz die.  The others had stamped shell images from the Crafty Individuals set, and all were sprinkled with mult-coloured glitter (to represent sparkling jewels).  To finish it off I wrote and printed a small rhyme and aged it using distress inks and tearing the edges.   The font used was Treasure Map Deadhand.
Posted by Kate at 18:37 No comments: 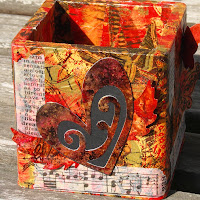 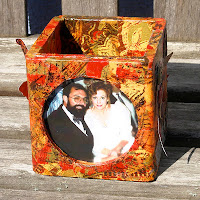 A small gift for my husband to celebrate 20 years of marriage. 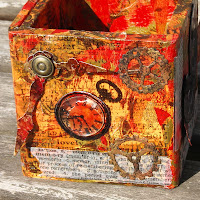 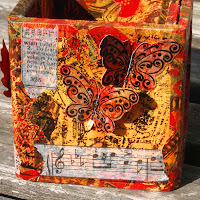 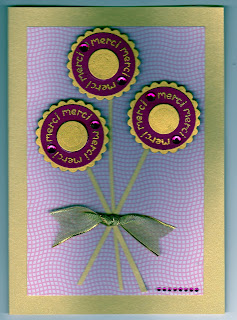 A Thank you card for my husband's Luxembourgish teacher.  The stamp was from Sizzix, and embossed in gold.  We were worried the hearts on the stamp would give her the wrong impression - particularly as it was near Valentine's Day when he gave her the card,  so I covered these with gems.  Circles and scalloped circles were cut with Spellbinders.  I would have stamped "Thanks a Bunch" on the card except it wouldn't have meant anything to her - not being an English speaker.
Posted by Kate at 12:45 No comments: 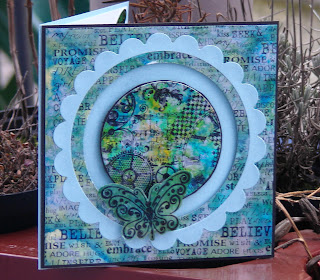 A Penny Spinner for Simon's Aide at school who has been sick all week.  The background was created using Pool, Sailboat Blue, Caramel, Latte and Silver Ranger alcohol inks, and overstamped with one of the  Crafty Individual stamps.  The stamp used for the centre of the flower was from Hot Picks, and the little butterfly was the freebie from April 2011's Craft Stamper Magazine.
Naturally the circles and scalloped circle were from Spellbinders.  When creating the track you need to use at least 3 size differences between inner and outer circles - 2 just isn't enough and the penny will get snagged.
I used a tiny bolt and magnet to connect the 2 pennies - I don't feel the foam pads are strong enough.
Posted by Kate at 19:55 2 comments: