When I saw the current CASology cue card I knew I had to enter - I saw this idea for die cutting some time ago and needed an excuse to finally try it out.  I adhered several strips of wash tape to plain white card and then die cut some shapes.  I just love how the joins are seamless.  Washi tape truly is amazing. 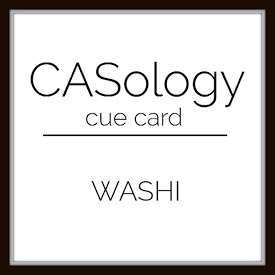 I'm also entering this card in the current Shopping Our Stash challenge - Something for the Big or Biggest Boy.

Thanks for stopping by, especially if you take the time to leave some feedback,
Kate 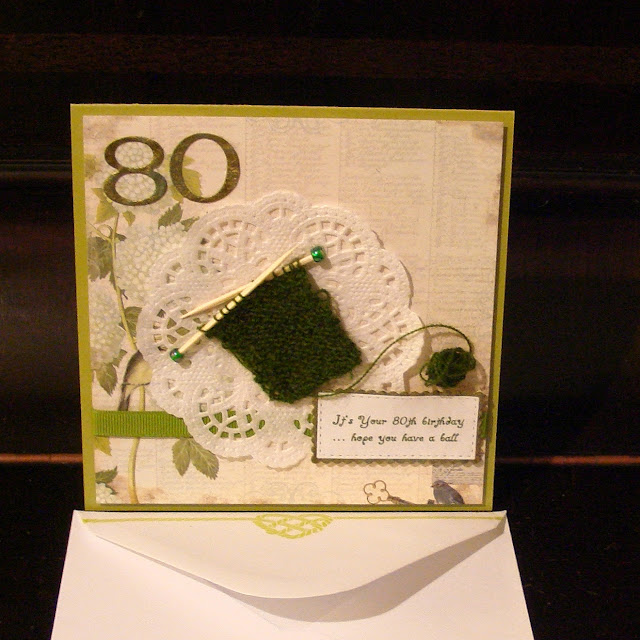 A friend's mother is turning 80 soon and she asked if I would make a special card for her.  Her mum lives even further away than mine as this card will be winging its way to NZ.  She's an avid knitter so we decided to go with a knitting theme.  A friend of ours did the knitting for the focal point of the card and as she is also a keen gardener,  I went with this pretty Belle Jardiniere paper from la Blanche which I picked up recently at Creativa Dortmund.

I kept fiddling with the card and hoping a knitting themed sentiment would come to me.  At some point I was rolling the ball of wool to make it rounder and "have a ball" popped into my head.  Rowena liked it so we went with that.

Thanks for stopping by, especially if you take the time to leave some feedback,
Kate
Posted by Kate at 22:58 No comments:

Off to the Ball 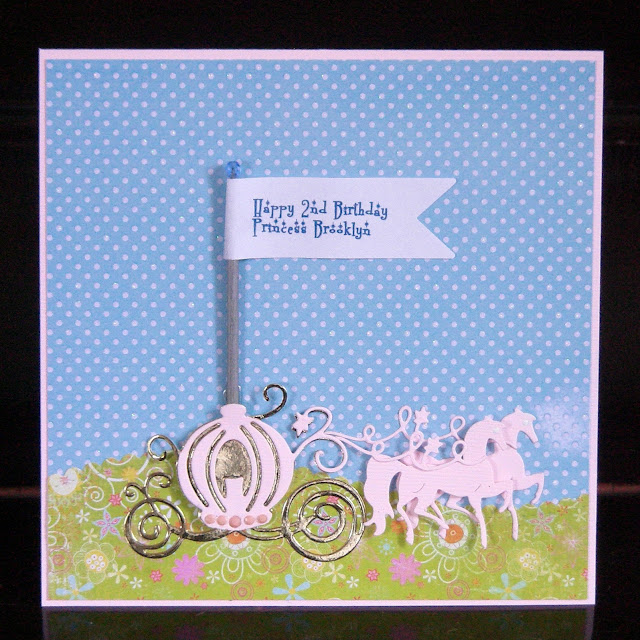 I've been wanting to try out this new Pumpkin Carriage & Horse Die from the Frantic Stamper Inc. for ages and a birthday card for a 2-year old girl seemed a pretty good excuse.

I'm entering this card in the current Addicted to CAS challenge where the code word this week is delicate.  Not sure if this card is CAS enough, but those tendrils curling around the carriage and forming the carriage wheels are certainly delicate - they were certainly a challenge to adhere to the card front!!! 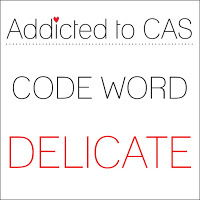 Thanks for stopping by - especially if you take the time to leave some feedback,
Kate
Posted by Kate at 11:50 2 comments: 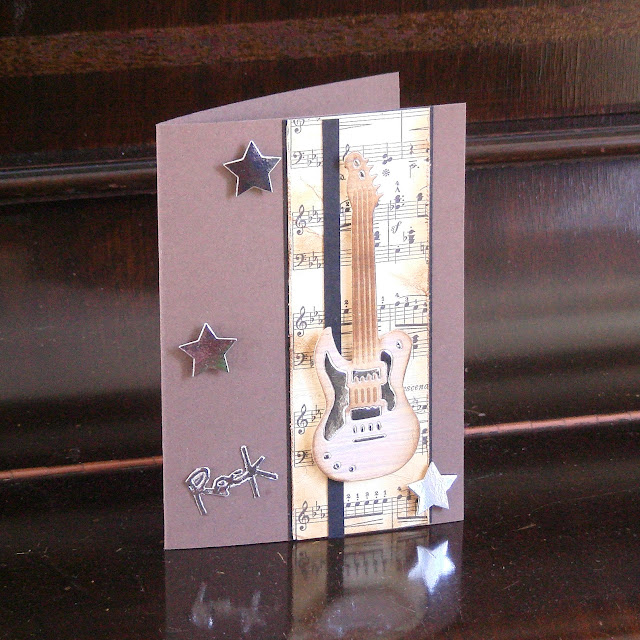 A belated birthday card for my baby bro.  He just bought himself a new guitar last week and this gave me the initial idea for this card. 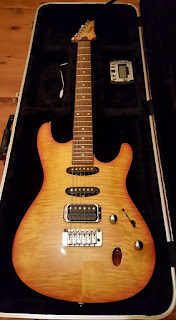 I created some woodgrain card using WORD (autofilled a box with a woodgrain texture) to try and mimic the wooden body of his new guitar and inlaid the cutouts with silver mirror card (boy was that fiddly).

The design was inspired by sketch MFTWSC271 from MFT Wednesday Challenge. 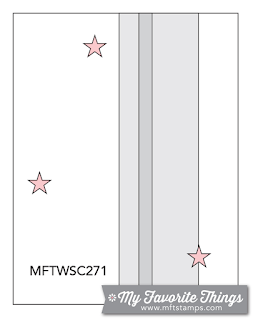 Thanks for stopping by - especially if you take the time to comment,
Kate

I had such high hopes for Darnell's NBUS Challenge 6, having bought so many lovely things recently (and not so recently) but here I am with a super quick card at the very last minute.


I couldn't resist this saxophone die at Metz last week.  I knew it would come in handy for making a thank you card for my saxophone teacher and the detail is lovely. 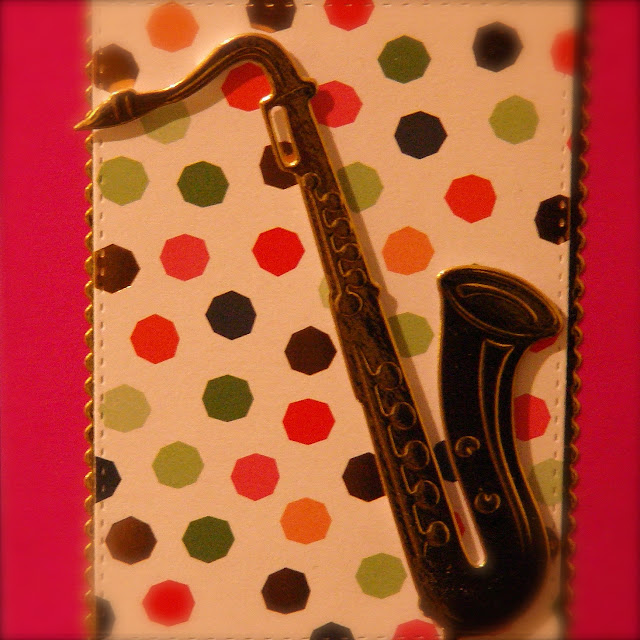 I thought the saxophone would pair quite nicely with the sentiments from the WMS Putting on the Ritz set and this is how I've used it here - embossed in gold of course !!! 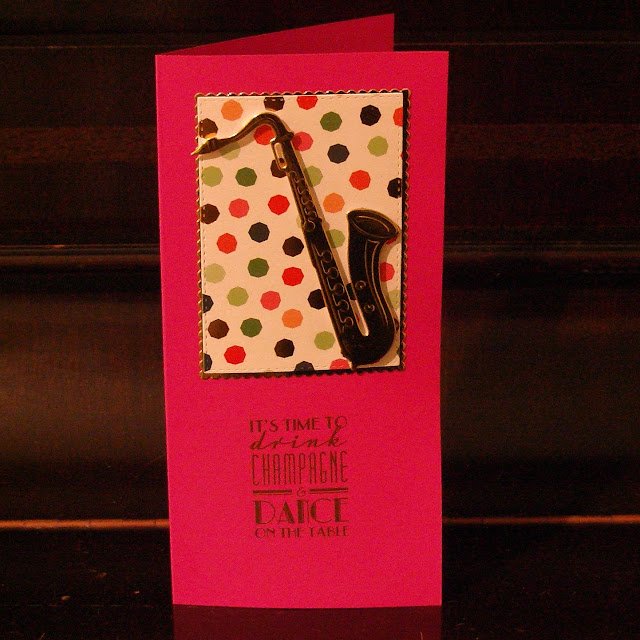 I think I might sprinkle a few gold sequins around to mimic champagne bubbles !!!

Thanks for stopping by, especially if you take the time to comment or hit the like button 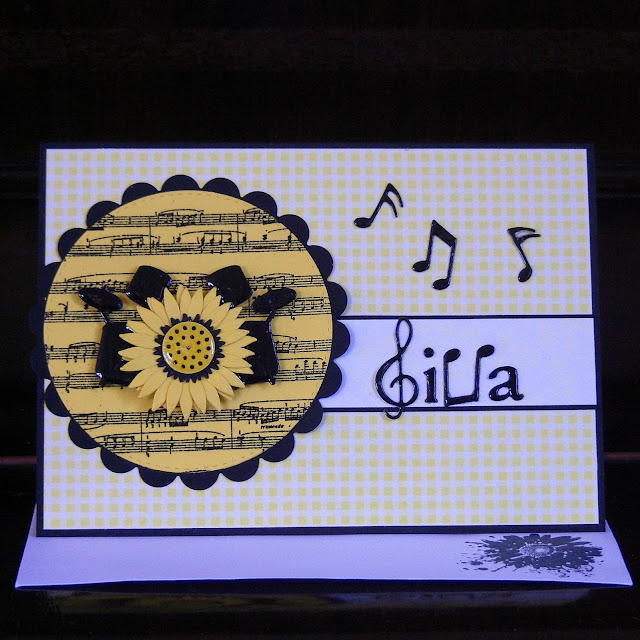 In the previous post I talked a little about Silla.  What I didn't say was that she is a very talented percussionist.  In the last few weeks Silla has played her drum during our mass services and this card was for our church choir to sign as we said farewell to her last night.

My friend Helen, who is the choir leader, runs the Montessori Sunflower group of Creches in Luxembourg.  She is an extremely talented and generous person.  She heads up a band called Alizeti - Alizeti is the Swahili word for sunflower .  They gig regularly to raise money for a new primary school in Tanzania.  She also spends her vacation time each year visiting and helping out at the orphanage which is how she met Silla.

So it was fairly important to incorporate a drum and a sunflower into this musically based card.   I also wanted to make it as different as possible from the previous card I made for Silla.  So I've gone for a round panel rather than rectangular panel and traditional sunflower colours rather than the pink and gold of yesterday.  Instead of a sentiment, I've spelt out her name using a treble clef for the S and a pair of quavers for the double L.

I am so happy I found this drum set (from Yvonne Creations) and this Centurion Alphabet Set (from XCut) last week at the craft fair in Metz.  They were both "instrumental" in the design for this card ;) and because they are NBUS I can enter this card in Darnell's NBUS #6 Challenge.

Thanks for stopping by, especially if you take the time to leave a comment or even just a like.  It makes me feel happy!!! 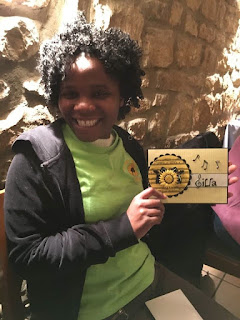 P.S. Silla was thrilled by her card ! 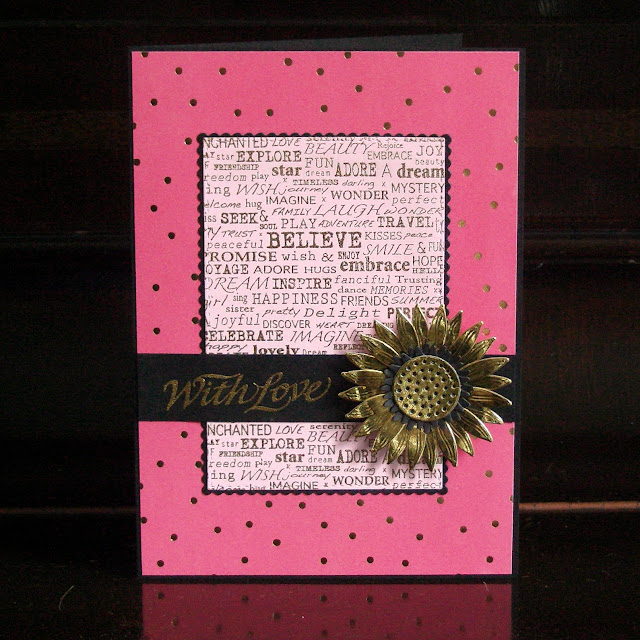 This is a special card for a really special young lady.  Silla's mother died when she was 2 years old and her father died a year later.  She survived unspeakable poverty until the age of 14 when she presented herself at the gates of the Ilula Orphan Project in Tanzania.  She is now a qualified teacher and for the last two months has been gaining work experience at the Sunflower Montessori Creches here in Luxembourg.  She returns shortly to Tanzania to teach children who are orphaned like herself.

My good friend Helen, who runs the Montessori Sunflower group of creches in Luxembourg asked me to make some cards for her.  This card is for the staff from the creche to sign.   There are so many things to say to her.  Good luck, thank you, you are amazing ….  but as this background stamp from Crafty Individuals says so many of these things and more, it was a perfect choice.  I embossed it in gold to match the swanky gold foiled DP and the gold MFT sunflower (which was of course mandatory).

I was very lucky to find this sketch from Freshly Made Sketches #226 to help me put it all together (though I flipped it vertically). 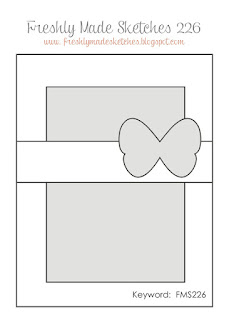 Thanks for stopping by, especially if you take the time to leave a comment.